Elizabeth is certified in crystal healing, meditation, past life regression, massage and Integrated Energy Therapy. In 2005, she became guardian to one of the “Group of 8” ancient Himalayan crystal skulls called HeartStar. She now offers Crystal Integration Alignments using a variety of these therapies, along with astrology, sound healing and aromatherapy in sessions uniquely designed for the client. 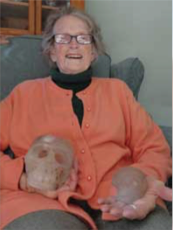 The Crystal Skull Messenger tells the story of British channel, Thelma Daisy Moeran, and introduces the extraordinary “Group of 8” Himalayan crystal skulls. These ancient crystal skulls were discovered in caves in Tibet in 2002, and are believed to have been brought and buried in Tibet before the fall of Atlantis. The book chronicles the meeting of Thelma and Elizabeth HeartStar and their journey as guardians of the ancient Himalayan crystal skulls, HeartStar and Yangtze, and the work they have done from their homes in Sedona, Arizona, and Glastonbury, England.