Elizabeth lived in Glastonbury, England, for fourteen years and has been guiding self-questing journeys to England, Ireland, Scotland and Wales since 1995 to Reawaken the Heart of Avalon and its Holy Grail.

The land is the Shaman, revealing much to you when you enter and open to the powerful vortex energies. Elizabeth is honored to be your personal guide, helping and supporting you in manifesting your intention for your time in Sedona. You create your retreat; hiking, meditation, chakra, writing and medicine wheel ceremonies are some of the many tours offered.

Sedona is a beautiful and sacred place of ceremony, awakening and vision; a spiritual land to ancient peoples and native tribes for thousands of years. The spectacular Red Rock cathedrals are naturally formed and impregnated with the ancestral spirits and guardians of Sedona.

Elizabeth HeartStar first experienced an awakening into her spiritual and tribal roots when as a young teen she spent the summers in Sedona. She returned to live in Sedona in 1990. While in meditation in 2007, in the Cave of First Woman, the Star Ancestor Spirit of Sedona appeared to her, revealing themselves and the red rock crystalline City of Light that they exist in, and asked Elizabeth to guide people on sacred journeys. 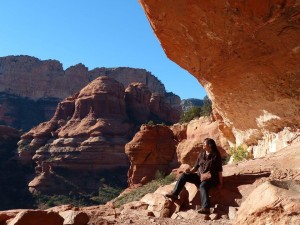